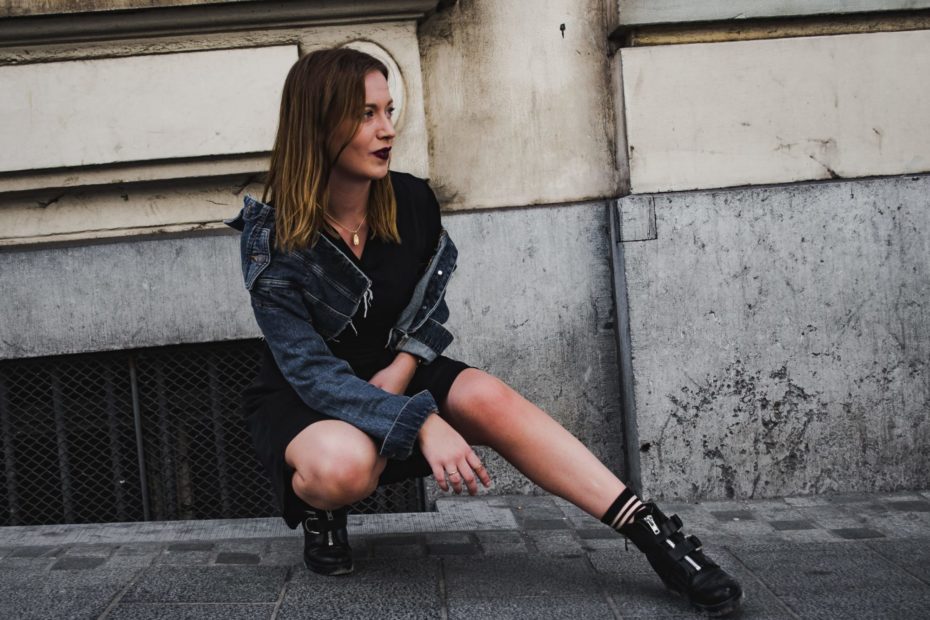 So many reinventions are driven by a need for a fresh start, for being more adult, for a new, different, better self. But my proposition is that we keep our core style and then expand on it, instead of starting from scratch.

Partly, this is because as a teenager / young adult I continually tried to make a brand new personality for myself, and it never stuck, never felt right, and didn’t actually make my life better.

Hence, rooted reinvention – a method of growing, evolving and finding fresh new leaves and branches without ignoring or destroying the foundational roots that hold our core strength.

Today I want to talk about claiming ‘battle armour’ for every day life. Amidst the hundreds of methods and perception-shifts for self-help books – one of the most useful techniques I use is almost unheard of, despite making sense considering the science of how our mindset works.

Essentially, our perception (thoughts and beliefs) shape which chemicals travel to neurons in which areas… our thoughts do impact the physical structure of our brain. Especially if we can also associate specific emotions or feelings with those thoughts. By harnessing costumes (mentally and physical), you can shift the chemicals in your brain, and eventually, your brain’s physical structure, which can then change your experience of wellbeing.

And anything I can do to feel better in my own skin is a win-win for me.

Today, I’m focusing on the physical aspect of costumes as armour.

It began with a pair of black ankle boots.

I was about 8 when my mum bought me some black ankle boots from shoezone. They were around £10, and neither of us realised how much they would shape my life over 20 years later. They were simple black boots. The heel was maybe 2 inches, and they had a zip up one side.   (In hindsight, it was also the last time I actually wore a damn heel aside from my school prom.)

As a millennial who grew up with Tomb Raider on the PC, they made me feel like Lara Croft. I read fiction books like The Moon Riders and watched in awe as a Batgirl took out baddies in the now-cringe-worthy-1960 re-run of Batman.

Yes, these were my role models in 1998. (Aside from Britney Spears, of course.) But those boots made me feel powerful. They gave me height. They were zipped on one side, so I didn’t have to worry about laces (which I hated as a kid) and people told me they made me look “smart.” I felt ‘grown up’ and thus, powerful.

And I had forgotten all about those boots until this week.

Boots are a big deal.

I probably grew up out of them around the age of 11 or 12, and by then, my feet were too big for ‘feminine boots’. As in, shoe shops did not stock female boots in my size. In the UK, most shoe designers stop at a size 8 for women’s shoes. And unlike clothing sizes, I can’t “lose weight” on my feet.

So at 12, I moved onto men’s trainers (sexy, I know) and never really looked back. I found some flat suede boots as a late teenager, and bought some brown calf-highs for my wedding (both also from Shoezone. Thank you for size 9 boots, SZ. No this post is not sponsored.)

But this week, I was specifically looking for an A-line skirt and black boots to wear at my dayjob. It was a sensible idea, and I went to town armed with my birthday money, feeling like an ‘adult’. (Whatever that means.)

I looked through Shoezone’s rack of female boots, not daring to get my hopes up that my size 9/9.5 (Euro size 43/44) feet would fit even half of these boot styles. It was kind of knowing-at-first-sight.

I saw them first, glanced through the sizes, and then moved on when the top size was an 8. But as I left, I felt the pull. The boots weren’t just black boots. These were exactly what I was searching for. They matched not just my vision for the outfit for work but holy hell if someone made a pair of boots for me, they’d pretty much look like that. (Maybe slightly taller but, they’re pretty damn close.)

I still own a spiked choker from my teenage days, still have chains that hang from my jeans when I feel in the mood for some extra ‘power’. These are my costumes that represent the fighter in me driven forward with anger and passion to make a difference in the world. They are the battle armour that bring out my inner Moon Rider, my badass Lara Croft mindset.

These boots were studded.

I asked at the till, and yes, they did go to a size 9. They could reserve them in another store for me.

I paused. Driving to another store, paying another parking charge, getting home later… But I said yes. Again, the costume felt so ‘right-for-me.’ I tried them on in the other store, and the lady at the counter said “they suit you.”

Damn right, they do.

A real sense of power.

I’ve worn them every day since, with 3 different skirts. And I feel like an utter badass in them.

Under trousers or even with my skirts, they don’t necessarily look ‘out of place’ and yet, they give me a confidence boost that has a visible impact on how I go about my day.

This is the secret weapon, the power of using costumes to shift your perception.

There are a lot of ways to apply this lesson, not just boots. Whether for you it’s shaving your legs, even under trousers, or painting your nails, wearing a specific ring or necklace that has meaning to you… Denim jacket, flower hairclip, leather trench coat… Tweak this concept for yourself.

If the idea of a costume feels strange, think about the different outfits and how you feel in them. Wearing a suit to work versus my pyjamas, even putting makeup on or not when I’m going to be staying home all day. These things impact our mind, our concentration, our view of ourselves.

Your armour will look different to mine, as will the ‘battles’ you face. From public speaking or managing difficult conversations to parking in that horribly busy car park or not snapping at someone you don’t get on with.

But remembering that we can all create and use our own battle armour to bolster our confidence and mental space… well, it feels strange not to use it.

Want to understand how to pick battle armour which supports you?